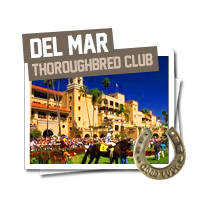 Del Mar Thoroughbred Club is the quintessential summertime racetrack. With a boutique meet extending from July through September, it is the West Coast equivalent to Saratoga. The top horses, jockeys and trainers all flock to where “the turf meets the surf” for some of the premier horse racing in the country. Since opening in 1937, the picturesque track has also gained a reputation as a hotspot for celebrities.

Del Mar has a one-mile main track that is made up of Polytrack, a synthetic surface with chutes for seven-furlong and mile and a quarter races. The 2014 live racing season will be the final one contested over the synthetic surface. In 2015, they will switch back to conventional dirt. Their turf course is seven-eighths of a mile with chutes allowing races to be extended up to a mile and an eighth.

The racing at Del Mar is top notch. With over twenty graded stakes run each season, the meet attracts the country’s top horses in all divisions. The racing at Del Mar traditionally serves as a stepping stone to the Breeders’ Cup as well as a prime unveiling spot for many promising two-year-olds.

Since being run for the first time in 1991, the mile and a quarter Pacific Classic (G1) has developed into a prestigious stakes race with an alluring $1 million purse. Some of the most popular racehorses in history have won, including Best Pal, Lava Man and Game on Dude. The winner of the Pacific Classic automatically wins a chance to compete in the Breeders’ Cup.

The seven-furling Del Mar Futurity (G1) is regarded as one of the premier events for juveniles in the country. Since the first running in 1948, the race has served as a showcase for some of the most talented two-year-olds. Some of the most notable alumni to come out of the Del Mar Futurity have been Kentucky Derby winners Gato Del Sol and Silver Charm as well as champions Best Pal and Lookin at Lucky.

A mainstay at Hollywood Park for decades, with the closing of that track the Hollywood Derby has been added to the stakes schedule at Del Mar for 2014. A Grade 1 event with a purse of $300,00, and restricted to three year olds, the Hollywood Derby is run over 1 1/8 miles on the Del Mar turf course.

Going through past winners of the $300,000 Clement L. Hirsch (G1) is like taking a tour through the best fillies and mares in history. The mile and a sixteenth race has drawn some of the all-time greats of the sport including Zenyatta, Azeri, Bayakoa and Princess Rooney since its inauguration in 1967.

Find the best odds for your horse online and place your bets within minutes !